Bishop Barry C. Knestout returned to the Diocese of Richmond on Sunday, Dec. 8, “renewed in my episcopal commitment and sense of communion with the Holy Father, the bishops and people of dioceses throughout the U.S. and throughout the world.”

Bishop Knestout had been in Rome since Dec. 1 for his ad limina visit — a visit that occurs anywhere between every five and eight years during which diocesan bishops meet with the pope and representatives of various Vatican congregations and commissions. While he had been present at three ad limina visits while serving in Washington, this is the first one Bishop Knestout attended as an ordinary, i.e., head of a diocese. 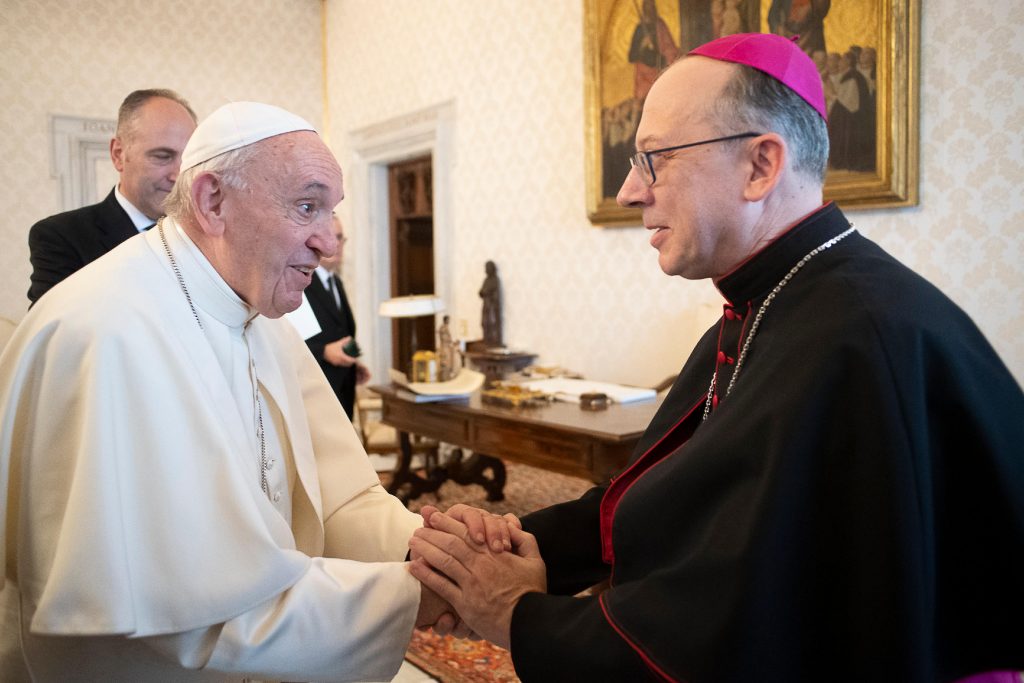 Pope Francis greeted each of the bishops individually during which time Bishop Knestout presented him with a copy of the coffee table history book of the Diocese of Richmond and a copy of the commemorative recreation of the original decrees establishing the diocese.

The pope, according to the bishop, expressed in English his gratitude for the gifts and imparted his blessing upon the people of the diocese as it celebrates its bicentennial in 2020. 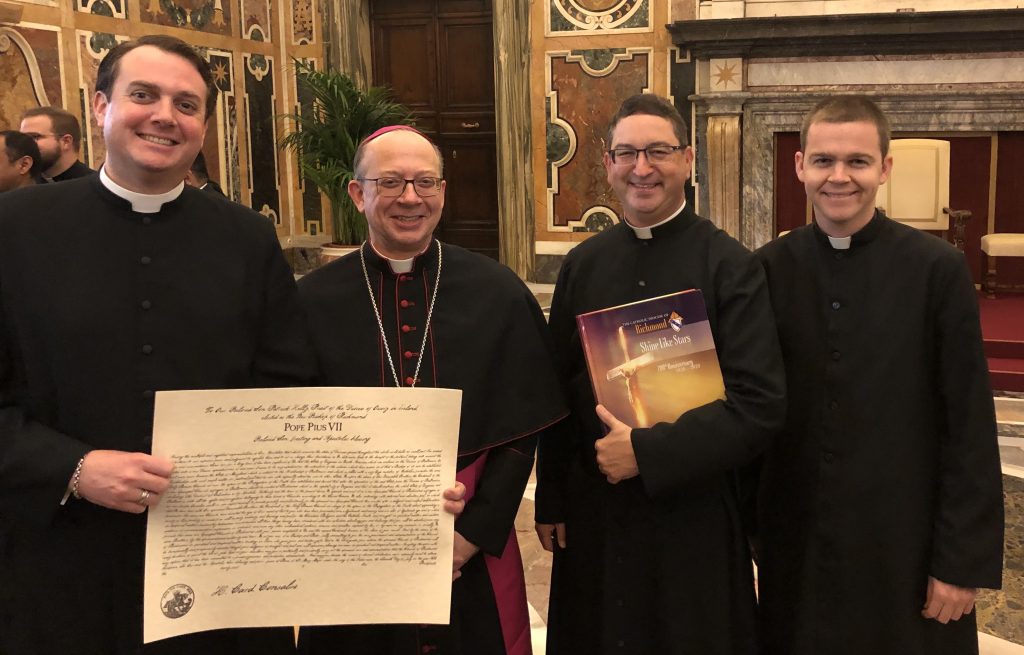 Later, Pope Francis met with the bishops of Regions IV and V as a group.

“The audience with the Holy Father was an experience of conversation, dialogue and accompaniment,” Bishop Knestout said of the nearly three-hour meeting. “The Holy Father began by encouraging us to speak from our hearts and that any subject or issue we wanted to present was OK. There was enough time in the meeting where any bishop who chose could have the opportunity to present it to the Holy Father.”

Bishop Knestout used the opportunity to talk about the diocese’s 200th anniversary.

“I spoke to the Holy Father of the many works of catechesis, prayer, sacrament and charity in the diocese,” he said. “I described the large geography and diversity of the diocese and the extensive mission areas of Appalachia as well as migrant ministry in the East.” 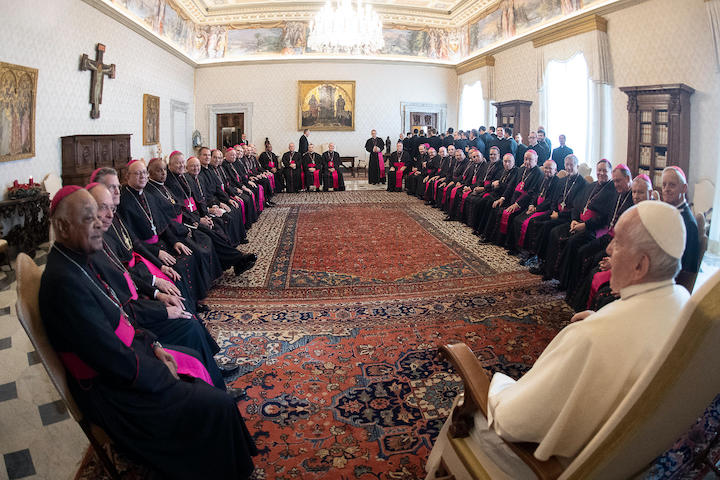 Bishop Knestout (fourth from left of Pope Francis) is one of 37 bishops from Regions IV and V who met with the Holy Father, Dec. 3, 2019. (Photo/Vatican Media)

The bishop said he also spoke about “the vibrant faith of the many parishes of the diocese and the legacy of social service and outreach to the poor.”

He continued, “I indicated that as an offering to commemorate our bicentennial, there would be an octave of service offered by the people of the diocese so that we might mark our anniversary by a clear and generous expression of charity toward all the poor and those on the periphery.”

According to Bishop Knestout, Pope Francis expressed gratitude for those works of charity and “encouraged us in fulfilling these intentions and commitments during our anniversary year.” 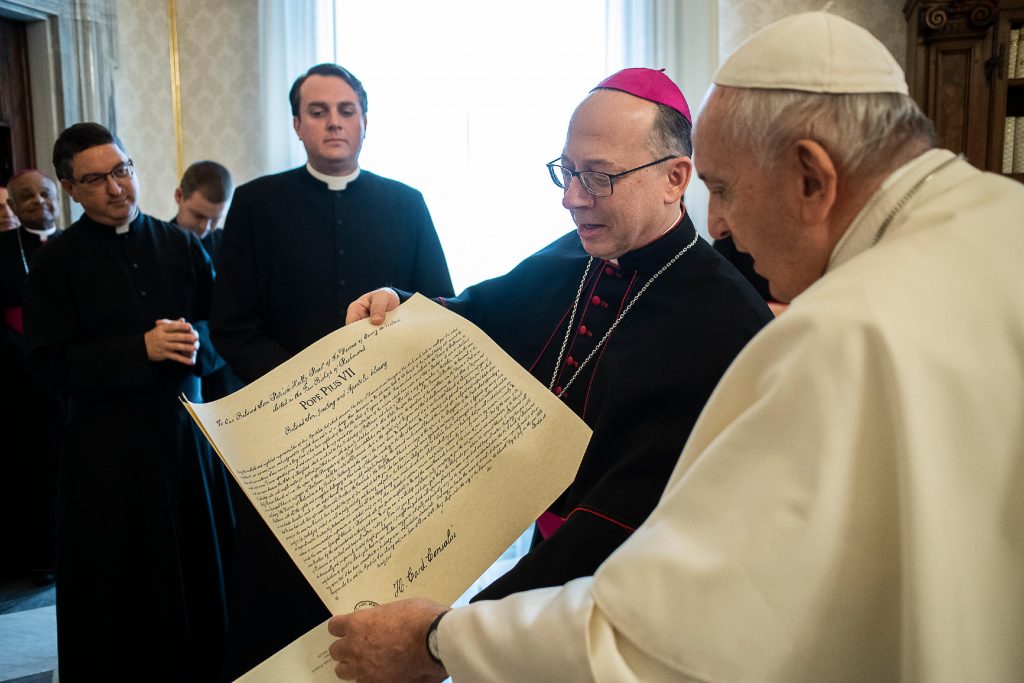 Bishop Knestout presents to Pope Francis a copy of the commemorative recreation of the original decree establishing our diocese as we prepare to celebrate our bicentennial in 2020. (Photo/Vatican Media)

Reflecting on the ad limina, Bishop Knestout said, “This was the most memorable visit I have ever had with a successor of St. Peter. The time spent with him and the personal encounter with His Holiness were truly extraordinary! He was joyful, personal, straightforward and pastoral in this encounter with each of us and expressed a sincere, genuine concern for the particular circumstances, needs and challenges faced by each bishop, diocese and member of the Church.”