Renovation of Basilica of St. Mary of the Immaculate Conception, Norfolk, Leads to Historical Discovery 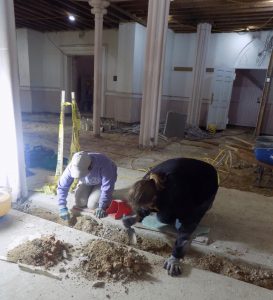 Jane Kim, an archeologist with the Fairfield Foundation, and Tristan Converse, an electrician from Four C Construction, work on excavating an area in the floor of
the Basilica of St. Mary of the Immaculate Conception, Norfolk. (Photo/Wendy Klesch)

A construction crew working on the renovation of the Basilica of St. Mary of the Immaculate Conception in downtown Norfolk struck history last October when a jackhammer used to break up an old concrete floor broke all the way through, unearthing a brick vaulted drain dating from the late 18th to early 19th century.

The drain, which is about three feet wide and four feet tall, seems to lead in the direction of the Elizabeth River.

“The drain is dry and large enough for a person to get through,” said Father James Curran, pastor at St. Mary. “Norfolk was well-known as a hub of the Underground Railroad, so the question is: could it have been used as a tunnel?”

The church is consulting with the Fairfield Foundation, a nonprofit archeological and preservation center, in finding more answers.

Meanwhile, renovation continues on the 158-year-old gothic basilica, home to the oldest parish in the diocese and the only African-American basilica in the country.

“The work on the church is continuing,” Father Curran said. “We’re just working around the site until we have the chance to excavate it further.”

“This is history,” he said. “We’re excited to find out as much about it as we possibly can.”

Be sure to read the full story in the Dec. 16 issue of The Catholic Virginian.