The Most Rev. Barry C. Knestout’s Statement on the 20th Anniversary of 9/11

Bishop Barry C. Knestout issued the following statement on the 20th anniversary of 9/11:

“As our nation prepares to observe the 20th anniversary of Sept. 11, 2001, I am reminded of the words of St. Pope John Paul II, who during his General Audience the following day, called the actions a ‘dark day in the history of humanity, a terrible affront to human dignity.’ He continued, ‘…faith comes to our aid at these times when words seem to fail. Christ’s words are the only ones that can give us a response to the questions which trouble our spirit.’ 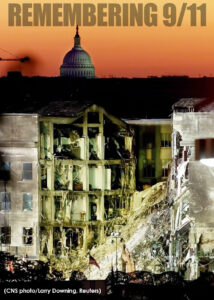 “Any of us old enough to remember 9/11 can never forget the images forever seared into our minds from New York, the Pentagon and Pennsylvania, and the devastating loss of life. So many individuals remain permanently impacted from the events of that day – our first responders, to include those here in Virginia who acted courageously at the Pentagon; volunteers; loved ones of those who did not survive; rescue workers and so many more.

“Like you, I remember where I was that day when I heard the news. I was a couple of months into my assignment as director of the Archdiocese of Washington’s Office of Youth Ministry and Catholic Youth Organization. Listening to WMAL as I drove to the pastoral center, I learned that a plane had hit the World Trade Center. Like everyone else, I spent the rest of the day perplexed and shocked as I watched the reports on TV.

“Our reflections on what occurred 20 years ago remind us how valuable our faith and hope in God are, and how important it is for us to nurture these and to live them so that they may prepare us for and sustain us during our darkest hours.

“As we lift up in prayer all who served that day and in the days and weeks that followed, let us take to heart the words of St. Pope John Paul II: ‘Even if the forces of darkness appear to prevail, those who believe in God know evil and death do not have the final say.’

“May our Blessed Mother, as Our Lady Queen of Peace, protect our great nation.”