The “Simbang Gabi” is a long treasured Philippine tradition originally a series of “dawn masses” for nine consecutive days before Christmas Day. Its liturgical significance emanates from the Season of Advent, being the time of spiritual preparation and purification to worthily welcome and receive the Child Jesus in our midst. The Mass at Dawn, Simbang Gabi, is a nine-day novena to the Blessed Mother. It starts every Decemb

er 16th and is one of the longest and most important religious celebrations in the Philippines that has lasted over 600 years. 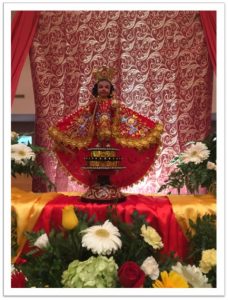 The Santo Niño image is the same one that the Spanish explorer, Ferdinand Magellan, brought with him when he arrived in the Philippines in March 1521. It was a gift from the Spanish King Charles V to Queen Juana of Cebu on the occasion of the baptism of the Queen, King Humabon and 800 of their subjects. Magellan was subsequently killed in battle by the famed warrior, Lapulapu, and forty-four years later, another expedition led by Miguel Lopez de Legaspi burned the village of Cebu. Juan Camus, a sailor in Legaspi’s fleet, found among the burned ruins of a modest house, the image in a pine box, unscathed. It was transferred to the Church built by the Augustinians where the Holy Image has been kept and venerated through the centuries.