Diocese of Richmond Catholic Schools Continue
to Raise the Standards 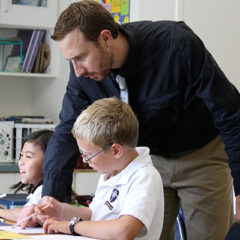 According to the Cato Institute in its February 2012 report on schools, “One of the first things you learn when you start to study the comparative performance of school systems is this: on average, Catholic schools are much more educationally effective and vastly more efficient than state-run schools.”

Academically, Diocese of Richmond Catholic schools outpace their counterparts in nearly all categories. For example:

Higher Test Scores: Catholic schools score higher on standardized test scores. A report by the the National Assessment of Educational Progress (NAEP) shows that in Mathematics, 8th graders in Catholic schools scored 12 points higher than their public school counterparts in 2019, and 16 points higher in Reading. Within the Richmond Diocese, our schools consistently rank in the top 12% on standardized tests.

Higher SAT Scores: Average SAT scores for schools in the Diocese of Richmond are 1157, compared to the national average of 1061, and the Virginia average of 1151.

Higher Graduation Rates: Diocese of Richmond Catholic schools maintain a 98% graduation rate. The U.S. average, according to the National Center for Higher Education, is 88% (based on 2018-2019 national data) .

More Graduates Attend Four-Year Colleges: The percentage of seniors attending a four-year college is higher among Catholic school students (86.5%) compared to other religious schools (63.0%) and other private schools (56.8%). In the Diocese of Richmond, in 2019, over 95% of our graduates are attending four-year colleges, while 90% attend four-year colleges..

More College Scholarships: Over $25.5 million in scholarships and grants were offered to 192 high school seniors graduating from Richmond Diocesan Catholic schools in the class of 2021.

Middle States Association of Colleges and Schools (MSA) is a worldwide leader in accreditation and school improvement. For over 130 years, Middle States has been helping school leaders establish and reach their goals, develop strategic plans, promote staff development, and advance student achievement. Hundreds of faith-based schools seek out MSA accreditation because MSA supports and recognizes the importance of having schools fulfill their missions under their specialized faith-based traditions and values.